David M.R.D. Spencer was the founder and Project Leader for ChristianMedia.ca. He ran the project from November 10, 2000 to December 20, 2008.

David helped form a community group and network that established a low power FM radio community station in Erin, Ontario, Canada. He designed the first Joomla! version of the radio station's web site. He also produced over ten (10) radio documentaries that were aired on the radio station.

From 1988 to 1989 David was the executive producer of Generation XC a youth focused television show written, performed and produced by teens from ages 14 to 21.

David made a presentation to Canada's CRTC in January 1982 requesting that more Canadian written and performed gospel and contemporary Christian music be aired on Canadian secular radio stations. 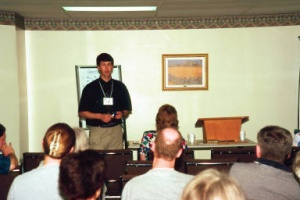 I was taught by my parents that God loved me ("Jesus Loves me this I know for the Bible tells me so..."), that I should thank Him at meal time by saying grace and that He created the earth and all creatures. I was drawn to Jesus Christ through a church in Brampton, Ontario, Canada that spent time and money reaching out to youth. This body of Christian believers showed enough faith to invite me as a 15 year old to play electronic keyboard organ at an evening youth service. I connected with some youth, was invited to youth group and attended a number of youth retreats in central northern Ontario. I chose to become a Christian, accept Jesus Christ as my Lord, Saviour and best friend when I as 17 years old. Since then, my life has been full of clear direction, hope, purpose and full of a peace that passes understanding.

Significant quotations made by this Media Worker from Canada.