The history of the Israelites is a story of God's promises and steadfast love. It begins when God chose Abraham to go into the land of Canaan. The descendants of Abraham later became slaves in Egypt, but Moses delivered them out of slavery and back to the land God had promised. The people of Ancient Israel were initially ruled by judges and later kings, the most famous being King David. Time and time again the people turned away from God, only to be forgiven. Eventually however, the kingdom of Israel split in civil war into the northern kingdom of Israel and the southern kingdom of Judah. Both fell to invading armies and the people of Israel were exiled to foreign lands. Some returned and rebuilt the temple in Jerusalem, but remained under foreign rule. The Romans controlled the area of Palestine at the time of Jesus, who came to restore God's kingdom - but not in the way people of the time expected - he restored us to a right relationship with God.

The table below is a brief time-line of the main events of the Old Testament.

The patriarchal period begins with Abraham (Abram), who lived around the 1,800 BC. The life of Abraham is recorded in the Book of Genesis. According to Genesis, God called Abram to faith and obedience, calling him to leave his home of Ur, and move to a land that He would show him. Abram, his wife Sarai (Sarah), and his extended clan then moved to the land of Canaan. In this land, God promised to bless him and make him a great nation (although Abraham was childless at the time). Trusting this promise, Abram journeyed down to Shechem, then to a spot between Bethel and Ai. He then moved to the oaks of Mamre in Hebron. The Bible tells us that Abraham trusted God, and God credited this to him as righteousness.

Abraham's wife, Sarah, bore a son, Isaac, late in life. Isaac was the father of Jacob, who God renamed Israel. Jacob was the father of 12 sons, whose offspring became the 12 tribes of Israel. One of his sons, Joseph, was sold into slavery to Egyptians by his brothers who were motivated by jealousy. In Egypt, through God's hand, Joseph rose to become the Pharoah's right-hand man. When a severe famine occurred throughout Egypt and Israel, Joseph's brothers and their families moved to Egypt.

These stories are told in the book of Genesis.

Slavery in Egypt and the Exodus

The Israelite (Hebrew) people multiplied rapidly in Egypt but were forced into slavery by the Egyptian pharaohs. Of the 12 brothers who went to Egypt, each had sons who formed a clan - the twelve tribes of Israel. For approximately 400 years the Israelites suffered in Egypt, until Moses was born. After calling Moses to free the slaves, God miraculously rescued the Hebrew people bringing them into the Sinai region. It was here that the people received the Ten Commandments.

These stories are told in the Book of Exodus (also Leviticus, Numbers and Deuteronomy)

Joshua succeeded Moses as the Hebrew leader and led the people into Canaan (Israel) conquering and destroying the people in that land under God's direction. Each tribe of Israel moved into its own designated area of Canaan.

These stories are told in the Book of Joshua.

The twelve tribes of Israel were initially united as one people. The country was initially led by judges – religious leaders appointed by God who dealt justice to the people and also took charge in case of war.

Later, the people of Israel insisted on having a king like the nations around them, and the judge Samuel appointed King Saul, who was followed by King David and then his son Solomon.

(These stories are told in the Book of Judges, 1 Samuel, 2 Samuel and 1 Kings (also 1 Chronicles). 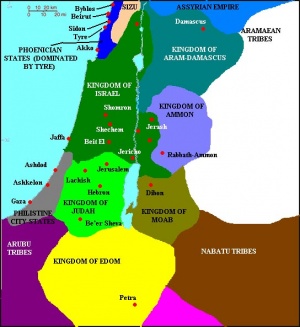 Following the death of King Solomon, the kingdom of Israel underwent a schism, bisecting into the kingdom of Israel in the north, and the kingdom of Judah in the south (containing Jerusalem). This is described in 1 Kings 12. The remainder of the book 1 Kings and all of the book 2 Kings describes the history of Israel during this period of a divided kingdom. It explains from a theological view the political developments that occurred in this time. Both kingdoms progressively lost sight of God and began to follow pagan gods.

There was especially rapid decline into polytheism in the northern kingdom, ultimately resulting in God's judgement against the kingdom with the invasion of the Assyrian army and the deportation of the people, who ceased to exist in history as an independent culture or people.

In the southern kingdom of Judah, the decline was slower, with certain kings, such as Hezekiah and Josiah, refocussing the nation on God. Ultimately however the southern kingdom also received God's judgement for their abandonment of him in place of other gods, and the kingdom was invaded by the Babylonian army and the people deported to Babylon. The Jews of the southern kingdom however maintained their identity and culture and so did not cease to exist in history.

During this period, there was intense prophetic activity with prophets such as Isaiah and Jeremiah calling the people back to God.

Below is a table showing the kings of the two kingdoms during this period, with estimated dates of when the kings ruled.

These stories are told in 1 Kings and 2 Kings (also: 2 Chronicles)

In 722 BC the Northern Kingdom of Israel was conquered by the Assyrian Empire. Its people were moved en masse by the Assyrians into neighbouring territories, and people of other conquered nations moved into the land to fill the void. The Jews of the northern Kingdom assimilated into their new lands, and these tribes of Israel disappeared from history as a distinct people forever. The account is explained in 2 Kings 17 as a judgement against the people of the the northern Kingdom for repeated and continued unfaithfulness to God.

In the ninth year of Hoshea the king of Assyria took Samaria, and carried Israel away to Assyria, and placed them in Halah, and on the Habor, the river of Gozan, and in the cities of the Medes.
It was so, because the children of Israel had sinned against Yahweh their God, who brought them up out of the land of Egypt from under the hand of Pharaoh king of Egypt, and had feared other gods,
and walked in the statutes of the nations, whom Yahweh cast out from before the children of Israel, and of the kings of Israel, which they made.
The children of Israel did secretly things that were not right against Yahweh their God: and they built them high places in all their cities, from the tower of the watchmen to the fortified city;
and they set them up pillars and Asherim on every high hill, and under every green tree;

A number of prophets were active prior to this time of the fall and exile of northern Israel, calling the people to repentance and to return to proper worship of God. They included Amos, Hosea and Isaiah.

Following the fall of the northern kingdom, the southern kingdom continued as an independent nation for a further 150 years. In the final years of the 8th century, Hezekiah ruled the kingdom as a king who trusted in God. The Assyrian Empire invaded Judah taking much of the land, and besieging Jerusalem in 701 BC, however it was not successful in taking the city. The kings following Hezekiah progressive lost sight of God, until Josiah came to the throne in 640 BC, and "rediscovered" the Books of the Law in the Temple. Josiah brought the kingdom back to God, but under subsequent kings the people degenerated again into polytheism. Around this time the Assyrian Empire began to lose its dominance of the Ancient Near East, and the Babylonians rose to power, finally destroying Assyria in 609 BC. The Babylonians continued their conquests, invading and conquering Judah in the early 6th century BC, exiling her people, forcing them to leave their country.

A number of prophets were active in this era before the conquest by the Babylonians calling. These include Nahum, Habakkuk, Zephaniah and Jeremiah.