Pentecost refers both to an important Jewish feast day and the recognized beginning of the New Testament church.

The Jewish feast of Pentecost arose as the celebration of the closing of the spring grain harvest, which formally began 50 days earlier at Passover.

On the Pentecost after the resurrection of Jesus, the Holy Spirit, as told Acts 2, descended on the disciples in the form of tongues of fire accompanied by the sound of a rush of wind, and gave them the power of speaking in such a way that people of different languages could understand them. In liturgical Christianity, Pentecost is an annual commemoration of this event, and it is observed as the birthday of the church and the feast of the Holy Spirit.

The word Pentecost is derived from the Greek word meaning "fiftieth". In Hebrew the word is Shavuot.

Acts 2 - The baptism of the three thousand 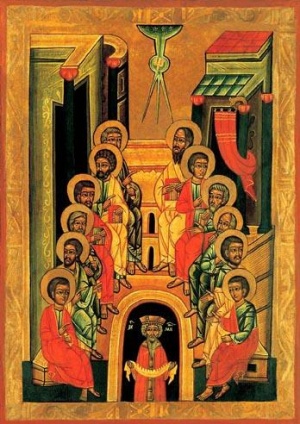 An icon of Pentecost

According to the Book of Acts, the experience of the Pentecost was shared by all in the large crowd, causing confusion and inspiring fear. It began with a sound of the rushing of a might wind (Acts 2:2) and tongues of fire appearing on the disciples (Acts 2:3). The disciples were filled with Holy Spirit and began to speak in languages foreign to them (Acts 2:4) and preach to a crowd. When a crowd heard this they were bewildered (Acts 2:6).

Then the Apostle Peter, standing with the eleven other apostles, spoke to the crowd. He explained that these strange events had been predicted by the prophet Joel, and that Jesus's coming had been prophesied by David. Peter explained that these events confirmed David's prophesied exaltation of Jesus. Peter then exorted his listeners to turn to Christ. About three thousand responded to Peter's sermon.

The events described in Acts 2 represent the fulfillment of the Old Testament prophecy of the outpouring of the Spirit, for example Ezekiel 36:25-29 and Joel 2:28-32. The passage in Joel describes the Spirit coming to all people or nations, which links with Genesis 12:2 and Acts 1:8.

The coming of the Spirit also further confirmed the authoity of Jesus. For example, the words of John the Baptist who had prophesied that Jesus would baptize with the Holy Spirit were fulfilled (see Mark 1:8 and Luke 3:16-17).

Pentecost had an electrifying effect on the disciples and it marked the start bold evangelism. The apostle Peter was especially instrumental in this. Whereas before Pentecost the disciples were fearful and hiding, afterwards they were able to courageously speak the gospel.

The day of Pentecost also saw the formation of the church because many Jews who heard the message of the gospel responded, although others turned away (Acts 2:41). This church was a clearly defined community which was devoted to the teaching of the apostles and to prayer.

The events that occurred on Pentecost also acted as a future sign of God's acceptance of the Samaritans and the Gentiles into the church. Because Cornelius and other Gentiles had a similar experience to the experiences of Acts 2, the apostles (at the Jerusalem Council in Acts 15:8) could see that God was calling them to be in the church as well. In this way, Acts 8 and Acts 10 can be seen of part of the fulfilment of Acts 1:8

But you will receive power when the Holy Spirit has come upon you. You will be witnesses to me in Jerusalem, in all Judea and Samaria, and to the uttermost parts of the earth." - Acts 1:8

Pentecost gave me the key to the Scriptures. It has kept my feet in all the slippery places of all sorts of criticism. The things that are stumbling blocks to so many are stepping stones to me. The inexplicable becomes plain when we recognize the presence and law of the Spirit. It balances scholarship, and gives discernment beyond all human learning. Indeed, learning without the Holy Spirit blinds men to the realities of divine truth. The man who thinks he can know the Word of God by mere intellectual study is greatly deceived. Spiritual truth is spiritually discerned.