The "Trilemma Argument" is an argument in logic about the identity of Jesus. The argument, which was made famous by C.S. Lewis, essentially concludes that Jesus cannot be considered to be a great moral teacher, rather it is only logical that his identity must have rested in one of the three following possibilities:

The premises of the argument rests on the fact that Jesus claimed to be God. Logically, if Jesus was not God then he was not very moral and so cannot be considered a great moral teacher - instead he must have either been lying or crazy. The only reasonable alternative to these two options is that Jesus was telling the truth, that is, Jesus is actually God. The argument also rests on accepting the reliability of the Bible which records the claims of Jesus to be God.

The earliest known use of this approach was by the Scotish preacher John Duncan (1796-1870) who was quoted in 1870 saying:

Christ either deceived mankind by conscious fraud, or He was Himself deluded and self-deceived, or He was Divine. There is no getting out of this trilemma. It is inexorable.[1]

The argument was popularized by the famous twentieth century Christian theologian and author C.S. Lewis. He outlined the argument in a 1943 BBC radio broadcast and it later formed the basis of his book Mere Christianity.[2]

The following diagram represents the logical flow of a modified form of the argument: 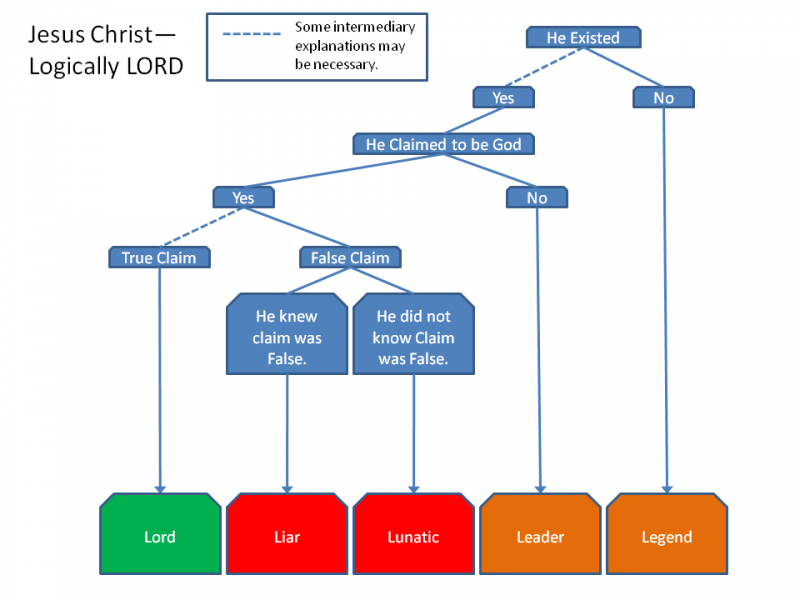 A man who was merely a man and said the sort of things Jesus said would not be a great moral teacher. He would either be a lunatic - on the level with a man who says he is a poached egg - or he would be the devil of hell. You must take your choice. Either this was, and is, the Son of God, or else a madman or something worse. You can shut Him up for a fool or you can fall at His feet and call Him Lord and God. But let us not come with any patronizing nonsense about His being a great human teacher. He has not left that open to us.

Return to Christianity -> God -> Jesus -> Jesus: Our Lord and God