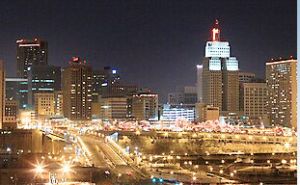 Saint Paul is the capital and second-most populous city of the U.S. state of Minnesota. The city lies mostly on the north bank of the Mississippi River, downstream of the river's confluence with the Minnesota River, and adjoins Minneapolis, the state's largest city. Known as the "Twin Cities", these two cities form the core of Minneapolis-Saint Paul, the 13th largest metropolitan area in the United States, with about 3.5 million residents. The city's population at the 2000 census was 287,151. Saint Paul serves as the county seat of Ramsey County, the smallest and most densely populated county in Minnesota.