Barrie Doyle is President of Gateway Communications International. He provides public relations and media services to organizations as well as training through videos and seminars.

Barrie Doyle is an experienced communications expert and professor. He believes in “Acts 17 thinking.” That is, ensuring that the key message of the gospel is communicated clearly to modern society in a manner they can most easily grasp.

He is a former journalist with the Toronto Star. Toronto Telegram and the Kitchener-Waterloo Record. He freelanced for a number of publications and broadcasters in the United States and Canada and lived and worked as a journalist in Washington D.C. covering the Watergate story and the return of US Vietnam prisoners of war.

In his time as a journalist, Barrie has interviewed evangelist Billy Graham, US President Gerald Ford, Canadian Prime Minister Pierre Trudeau, a number of NASA astronauts and officials, as well as entertainers Johnny Cash, Red Skelton and Pat Boone. He covered a wide variety of stories from a major Toronto air crash to the first manned landing on the moon to the Mississauga train disaster.

Barrie served 20 years in PR as the senior public relations executive for the Ontario Real Estate Association and Canon Canada Inc. before opening Gateway Communications International in 1993. As the Senior Manager Corporate Communications for Canon he was responsible for the launch of new products and a major environmental campaign as well as spearheading the company’s sponsorship of the 1994 Commonwealth Games in Victoria BC.

Barrie Doyle has made significant contributions to Canadian media. In 2005 Barrie founded the Good Words Expo an interdenominational Christian book expo and festival celebrating the variety, quality and breadth of Christian literature in Canada. He is author of the book "The Media and the Message: Communicating for Results" (ISBN:0-9731289-0-9)

Barrie Doyle became the Executive Director of 'Good Words and produced a family-oriented celebration of Christian literature in Canada on November 18, 2005 to November 19, 2005. The gathering was the first-ever such festival of its kind and was held at Bayview Glen Alliance Church in Toronto. 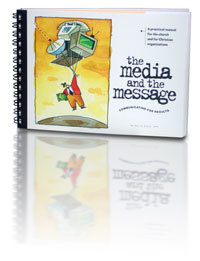 Barrie Doyle can be contacted via:

How to Help Barrie Doyle

You can help Barrie Doyle by

Worth Quoting from Barrie Doyle