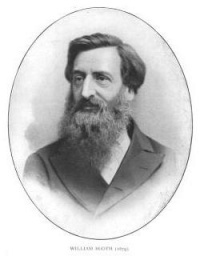 William Booth - Founder and 1st General of The Salvation Army

William Booth (10 April 1829 – 20 August 1912) was a British Methodist preacher who founded The Salvation Army and became its first General (1878–1912). The Christian movement with a quasi-military structure and government founded in 1865 has spread from London, England, to many parts of the world and is known for being one of the largest distributors of humanitarian aid.