Mormonism is a religion originating in the early 1800s as a product of the teaching of Joseph Smith and the Latter Day Saint movement. The term Mormonism is also often used to refer specifically to The Church of Jesus Christ of Latter-day Saints, which is by far the most numerous and well-known sects claiming derivation from Joseph Smith. Mormons believe that the original teaching of Jesus Christ was lost after his death and that Christ's teaching and church was restored by Joseph Smith and his followers. It has an uneasy relationships with mainstream Christianity. 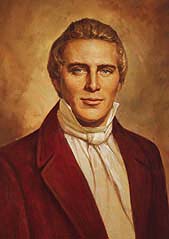 The Mormonism movement began in 1820 near Palmyra, New York. Joseph Smith, the founder of Mormonism, claimed to have received a series of visions in which he was told by God that all the churches were "wrong", their "creeds were an abomination in his sight", and all their "professors were corrupt". He was told that God would restore the true New Testament church using him as a mouthpiece. Consequently, Mormons consider Joseph Smith the first prophet of a new dispensation. Despite Smith's clear affirmations, Mormons generally minimize statements about other churches being false. They prefer to say that all churches contain some truth, but that all truth may be found only within Mormonism.

In the course of his visions, an angel named Moroni is said to have visited Smith to disclose the location of a book "written upon gold plates, giving an account of the former inhabitants of this [American] continent, and the source from whence they sprang". Moroni also said that "the fulness of the everlasting Gospel was contained in it, as delivered by the Savior to the ancient inhabitants". Joseph Smith was instructed to retrieve the plates and translate them with God's assistance. The result, called the Book of Mormon, was first published on March 26, 1830. Smith referred to the Book of Mormon as "the most correct of any book on earth, and the keystone of our religion". Following these first visions came a series of additional revelations that were later published in two books, the Doctrine and Covenants and the Pearl of Great Price.

Today there are many churches that claim to be the true successor of the church Joseph Smith founded. The largest of these is The Church of Jesus Christ of Latter-day Saints headquartered in Salt Lake City, Utah.

The Church of Jesus Christ of Latter-day Saints

The LDS is the largest Mormon denomination.

The Fundamentalist Church of Jesus Christ of Latter-day Saints is a conservative branch that continues to practice polygamy.

Mormons believe in the existence of multiple gods. This is rooted in the denial that the Father, the Son, and the Holy Spirit share the same being and substance. This stems from the normal Mormon assumption that a person necessarily has his own, unshared being. The baptism of Jesus, for example, is seen as an interaction between three god-beings, not just three persons[1].